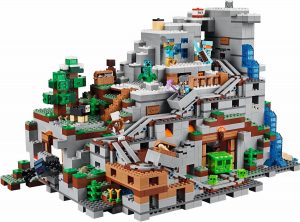 Today, LEGO has announced Minecraft: The Mountain Cave (21137) to the world. This set has been rumored for quite a while with LEGO putting up teaser images for weeks, which were compiled into a single composite giving us a preview look.

The set positively dwarfs the The Village (21128) which had 1600 pieces, where The Mountain cave has an astounding 2863 pieces! This set will be heavy when you pick it up!

The price (US $249) is a bit high for just a parts set, which some people have mentioned. As it stands, with a price per part of just over $0.08, it’s pretty good but not super great. If you’re a fan of Minecraft it does looks like a great set.

The press release confirms that this set will be available to LEGO VIP members starting June 15, and then available to the public on July 1.

Build and experience the Mountain Cave, featuring an amazing minecart track with an integrated redstone-powered minecart elevator, and an array of other features and functions, including TNT blasting, rotating spider-spawner, charged Creeper explosion and a lava burst.