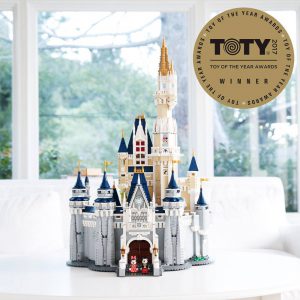 When it was first rumored last year, the LEGO Disney Castle (71040) gathered a lot of attention from Disney and LEGO fans alike. When the set was actually released, once again many fans were enthralled with it.

The LEGO Disney Castle has a scope and scale to it that we haven’t really seen from LEGO in a while, and the magic of the themed rooms is enchanting to children and adults alike.

This year at the New York Toy Fair the Toy Industry Association bestowed the title of Specialty Toy of the Year on the castle out of a tough group of competitors. Congratulations to LEGO for taking home many awards again this year.