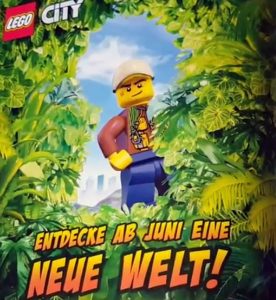 Until now, all we knew about the possible Jungle Explorers set was from a single image in a supplement to the 2017 LEGO catalog, but that all changed recently. Dutch toy site SinQel has posted placeholder listings for most of the early 2017 lineup.

This image appeared in the German version and translated it says “Discover a new world from June” according to Google. The minifigure and greens around him seem to promise an exploration of a jungle theme similar to the Volcano Explorers and Arctic Explorers over the last couple of years.

2016’s Volcano Explorers had a very similar roster of sets, for example:

No photos of the LEGO Jungle Explorers are available yet, but I anticipate we will see some from the upcoming Toy Fairs.