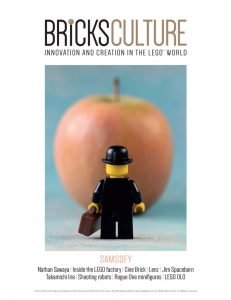 Republic 66 Media has announced the release of their Bricks Culture Magazine, Issue 7 with a focus on Global Culture such as photographers like Cole Blaq and artists like Nathan Sawaya.

Our Year 2 Guest Artists, Joe Perez and Tyler Clites, return with more stunning original creations that both have American themes, yet each is utterly different in subject and approach. Historian Gary Istok looks at the product that first made LEGO sets popular in Japan, while Sue-Ann Barber speaks to a young, talented builder from Himeji: Takamichi Irie.

What makes us all so passionate about the culture of the brick? David Alexander Smith ponders this in his regular essay but Julie Broberg discovers that not every fan likes to share their LEGO passion, when she meets Jason Cutten of London. We also have two sentimental journeys to the LEGO homeland of Denmark: Tim Johnson visits the hallowed halls of Billund’s LEGO brick moulding factory while Space fan Peter Reid tracks down Frank Madsen, the creator of the 1980s Jim Spaceborn LEGO comic books, which introduced Keko, the robot so beloved by Peter.

Members of Stuck in Plastic are focusing their lenses on Keko and all manner of robots in this issue, with contributions from across the globe and we also relax in a Portuguese cinema with Carlos Rui Ribeiro, to hear about the world’s biggest LEGO stop-motion animation festival, Cine Brick.

All this plus an extreme close-up look at the range of minifigures from Rogue One: A Star Wars Story and we revisit Andy Morris, first featured in issue 2, who has been scouring the globe to find the finest LEGO-inspired art and design for his beautiful new store.

Get your slice of the ultimate in LEGO innovation and creation with Bricks Culture magazine: 140 pages of luxurious, fascinating and beautiful insights into the modern LEGO world delivered to you every quarter in a collectable flat-spine folio format. Bricks Culture is available in print, desktop, iOS and Android formats as single issues (£9.99) or subscriptions (4 issues for £34.96, a £5 saving) from store.republic66media.com/all-bricks-culture