The LEGO Ideas team has announced the winner of the third review from 2015 sets. That review period ran from September 2015 to January 2016 and we covered the finalists on this post. My prediction at the time was that the HMS Beagle or the Yellow Submarine would be the final selection and I was half-right.

There were 2 projects selected from this round of qualifiers and my prediction about the Yellow Submarine set was correct. The other set is the Apollo 11 Saturn V model, which I think is awesome, but unexpected. With previous Ideas selections like the The Big Bang Theory, Birds, NASA Mars Science Laboratory Curiosity Rover and the Research Institute, the Saturn V shouldn’t be a surprise. LEGO is a strong supporter of STEM so seeing them support sets based on science makes sense. 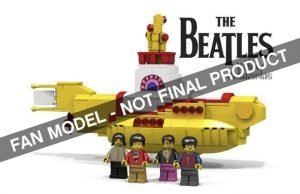 Kevin Szeto is the designer behind the classic Yellow Submarine that most people are familiar with. The final design and elements may change a bit from what Kevin submitted, but it will be very cool to have this little bit of history immortalized in LEGO. Plus, you get a full set of Beatles with no Yoko in sight. 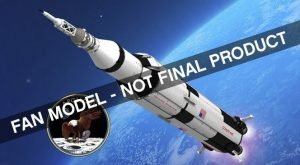 The Apollo 11 Saturn V rocket could be a huge piece for us to find a home for. The proposed model from saabfan and whatsuptoday is 1 meter tall (around 3 feet or 130 studs), but could be resized in the final version. The original model also has removable 1st, 2nd and 3rd rocket-stages each revealing more details including the “Eagle” Lunar Lander and Lunar Orbiter. This will be a must-buy for a lot of people.

Details, pricing and release dates for both projects will be announced later, but I would expect to see at least one of them before the holiday season, but that’s just me hoping.