We first saw that  LEGO would release a new Technic set based on a Porsche 911 way back at the Toy Fair in Nuremberg and a lot of people were excited by the camo effect on it. Turns out, that was really an attempt to slightly disguise exactly which model would be in the kit, just like the real-world version keeps photographers and the competition from getting too much info during testing & trials. 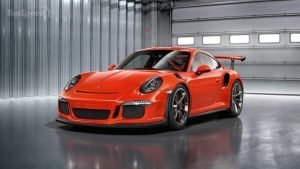 Details released by PromoBricks now reveal that the final model will be the 500-horsepower 2016 Porsche 911 GT3 RS and will be released on August 1, 2016. Car forums are reporting that the real Porsche will be produced in “2016 Lava Orange” as seen in the photo to the right. This would be a unique color for a LEGO set, but isn’t out of the realm of possibility.

We now know that the LEGO Porsche will be based on the 2016 Porsche 911 GT3 RS and will carry the LEGO set number 42056. PromoBricks are also reporting prices of €299.99 and £249.99, which converts to over $329 USD based on straight exchange. Although no piece count is released yet, the reported weight of the set including box and documentation is 4.8 kilograms (10.5 pounds) which isn’t out of range. The [easyazon_link identifier=”B00WHY4ADA” locale=”US” tag=”brickbrains-20″]LEGO Technic 42043 Mercedes-Benz Arocs 3245 Building Kit[/easyazon_link] is listed at 9.9 pounds.

My issue here is that the price is quite high for the set and early reports are that it doesn’t include any powered features, not that that’s a deal breaker. The set must either be huge or include features we haven’t heard about yet. Of course, we could also be paying for the Porsche brand.

What do you think? Do you collect the Technic or car sets? Would you pay over $300 for this set? Would you like the Lava Orange or the Black with camo? Leave your comments below.