On a fairly regular basis LEGO retires some older sets, often for reasons unknown. According to LEGO.com, the following sets are flagged as “Retiring soon” and could be hard to find or simply sold out.

LEGO DC Comics Super Heroes: The Tumbler (76023) – This is newly flagged as retiring and comes as a bit of a surprise to a lot of people, but I think it makes sense really. It’s part of the Batman The Dark Knight Trilogy, which is soon to make way for Ben Affleck as Batman in Batman vs Superman in 2016. Retiring the old set makes way for new ones. The Tumbler is a great model for those who like to build sets that match “the original” as models, instead of real play sets that fit with existing scales. 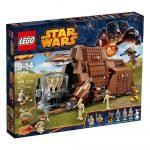 LEGO Star Wars MTT (75058) – This set currently available from Lego.com (US/Canada) and is flagged as both New and Retiring Soon. The Multi Troop Transport features lots of play options including firing missiles, flip-down side panels and several minifigures and other characters. Also available on Amazon from a couple of sellers. 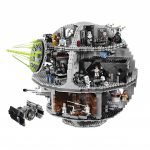 LEGO Death Star (10188) – This set has been around for a long time and is currently sold out on Lego.com (US / Canada) although and Amazon.com seller or a local retailer may still have it. This one, like The Tumbler makes sense to be retired. Recently news of an upcoming new Death Star (maybe a new UCS set) to be released in 2016 following the release of The Force Awakens. Whether this new set is related to TFA or not remains to be seen. Is there a new Death Star in the new movie? I can’t speculate yet.

Other sets listed as Retiring Soon are: