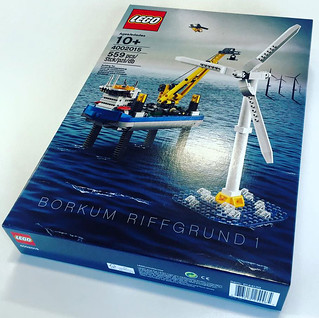 Being relatively new on the scene, I hadn’t seen the gifts that LEGO gives its employees before, and never considered the possibility of custom sets. Apparently this is something that LEGO does every year for most of their employees.

This year, they sent a gift pack to many employees, including seasonal hires. The rule seems to be that they had to be hired before Oct 1, and some store managers (the best ones) make a habit of hiring for the holidays before that so the employees get the gift.

The set shown above is part of this year’s gift. It’s the BORKUM RIFFGRUND 1 offshore wind farm that opened this year and LEGO was a primary partner. LEGO has a stated goal of reaching 100% renewable energy use by 2020.

A secondary gift is a Joey Camping Chair from Travel Chair company. Reader Noah Carson, a LEGO employee, posted this image to Instagram of his gifts and what he calls a “pretty cool” Christmas Card.

Given the licensing tie-ins, popularity of LEGO movies and video games, the company can afford to be pretty generous this year and it looks like the first group of 2016 LEGO sets won’t see any slowdowns in LEGO popularity for the coming year.