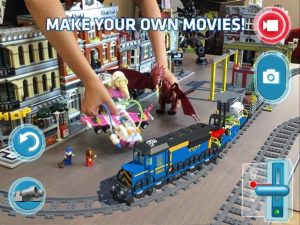 I told you last week about the upcoming LEGO AR Studio app, and it’s even better than I expected.

I downloaded the App from the Apple App Store this morning and spent a few minutes playing around. Some of the controls aren’t that intuitive, but the overall experience is crazy fun!

The limitations of the sets aren’t that you need to OWN them, it’s that you can only ADD those sets into your AR environment. You can, for example, define a play area on any flat surface (desk, table, floor, etc.) and then place the included sets onto that area. I chose my office desk and then had the dragon appear and breath fire at my work. It didn’t help, but it looked and felt good for a minute.

The problem, for me, was that it was difficult to control and interact with the sets (Dragon). When you figure it out, it’s awesome watching it fly around, and even better when you can pan around it while it sets fire to things.

The police station features officers moving around and going about their business, including the garage door opening and other moving parts.

Introducing LEGO® AR Studio – a new augmented reality experience from LEGO® – where you can play with digital versions of selected LEGO® sets in your real-world scenes!

Mix digital versions of selected LEGO® sets with your physical LEGO® scenes. Record the action and save movie clips directly to your device.

Create and compose your own LEGO® AR scenes!

Play out your stories

Experiment, play and let us know what you think about extending your creative play possibilities even further – making your very own scenes and movies with LEGO® AR Studio! LEGO® AR Studio is available on the following iOS 11 devices iPhone SE, iPhone 6s and later, iPad (2017), iPad Pro (1st Generation and later).