Man, I wish I was going to San Diego Comic Con this year! Well, that’s true every year, but this year’s exclusive LEGO set looks amazing! Yes, like the Amazing Spider-Man.

According to The Hollywood Reporter, this year convention goers will have the opportunity to enter the random drawing to qualify to buy a set of 2 exclusive BrickHeadz figures. The pair are Spider-Man and Venom and the Spider-Man figure looks awesome! 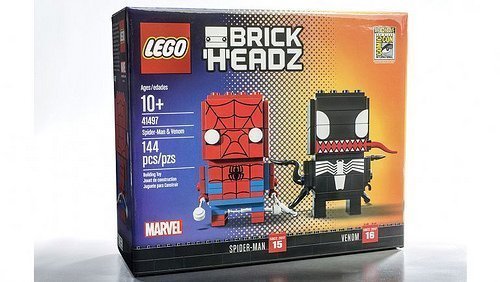 The set (41497) contains 144 pieces total to make up the 2 figures. It’ll retail for $40 at the convention and only be available through a lottery-like system that LEGO controls.

As Brickset.com points out, these figures are numbered 15 and 16 meaning that sets 13 and 14 have yet to be revealed. This may happen in conjunction with Comic Con or in a separate announcement. Speculation suggests they could be connected to Star Wars which would be a first for the BrickHeadz series but not entirely unlikely. More likely is there will be a corresponding DC set which would match the pattern so far. Disney characters not withstanding.

Don’t lose hope, faithful reader, last year there was a Twitter contest for the set as well although there is no word on this yet for 2017.