Following hot on the heels of yesterday’s 3 Super Hero Girls images, today we get pictures of the other 3 sets, full details on all 6, and a full press release for New York Comic Con.

First, let’s take a look at the pricing (in USD) for the 3 sets from yesterday:

Pricing seems about what we expect and they will be released to Canada, the US and Mexico on November 27 (Cyber Sunday?).

Now the new sets, with plenty of details: 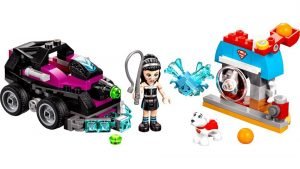 Join in the action-packed LEGO® DC Super Hero Girls™ world as Supergirls dog Krypto™ faces Lashina™and the blue Kryptomite™. This great set features a Lashina mini-doll figure, Lashinas tank with a stud shooter and space in the back for Krypto, plus Kryptos house with defense shield and a catapult.

-Includes Krypto and a confused blue Kryptomite.
-Includes a Lashina™ mini-doll figure, plus Krypto™ figure and a confused blue Kryptomite™.
-Features a tank with stud shooter and a cage in the back with removable cover to hold Krypto™.
-Also includes a doghouse with shield that opens, fire hydrant and a catapult.
-Fire the yellow ball element from Kryptos catapult at Lashinas tank.
-Capture Krypto™ with Lashinas whip and put him in the back of the tank.
-Break Krypto™ out of the tank to free him.
-Accessory elements include Lashinas whip, a yellow ball element, stud, Supergirls phone and a dog bone.
-This set offers an age-appropriate build and play experience for ages 7-12.
-Check out the 41230 Batgirl™ Batjet Chase for some high-flying Super Hero fun!
-Cute but evil Kryptomites are included in every LEGO® DC Super Hero Girls™ set.
-Lashina’s tank measures over 1” (4cm) high, 3” (10cm) long and 1” (5cm) wide.
-Kryptos doghouse measures over 1” (5cm) high, 2” (6cm) wide and 1” (3cm) deep.
-Price: $14.99 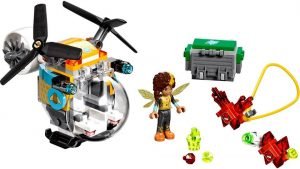 Be part of the action-packed LEGO® DC Super Hero Girls™ world as Bumblebee™ protects her shipment of crystals from the Kryptomites. This great set features a Bumblebee™ mini-doll figure, helicopter with opening cockpit, spinning rotors, stud shooters, zipline and space in the back for the crystals, plus a dumpster and small stud shooter for the two angry red Kryptomites.

-Includes a Bumblebee™ mini-doll figure, plus two angry red Kryptomites.
-Features a helicopter with opening cockpit, spinning rotors, zipline, two stud shooters and storage space in the back to hold the crystals.
-Also includes a dumpster to hold the stolen crystals.
-Load the crystals in the back of the helicopter and take off.
-Fire the helicopters stud shooters at the Kryptomites.
-Shake the Kryptomite™ off the helicopters zipline and recover the stolen crystals from the dumpster.
-Includes a small stud shooter for the Kryptomites.
-Accessory elements include four studs and three crystal elements.
-This set offers an age-appropriate build and play experience for ages 7-12.
-Join the other teens at 41232 Super Hero High School to learn more about being a Super Hero!
-Cute but evil Kryptomites are included in every LEGO® DC Super Hero Girls™ set.
-Bumblebees helicopter measures over 2” (7cm) high, 3” (10cm) long and 3” (10cm) wide.
-Dumpster measures over 1” (4cm) wide, 1” (3cm) deep and under 1” (2cm) high.
-Price: $14.99 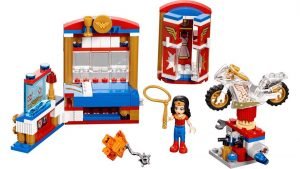 Be part of the action-packed LEGO® DC Super Hero Girls™ world as Wonder Woman™ protects her Golden Lasso from the Kryptomite™. This great set features a Wonder Woman mini-doll figure, dorm room with an opening window, bed with a secret drawer/screen, separate opening wardrobe and workstation, plus an invisible motorbike, tool/paint and a suspicious orange Kryptomite.

-Includes a Wonder Woman™ mini-doll figure, plus a suspicious orange Kryptomite™.
-Features a bed with opening window and space for a trophy above and storage space belowfor a drawer/screen, plus an opening wardrobe.
-Also includes Wonder Womans invisible motorbike, plus a workstation with a rotating platform for the motorbike.
-Set the invisible motorbike on the workstations rotating platform.
-Sneak the Kryptomite™ through the window and into the wardrobe to steal the Golden Lasso.
-Close the doors and capture the Kryptomite™ in the wardrobe.
-Accessory elements include Wonder Womans Golden Lasso, a wrench, two spray paint cans, trophy and a tub of wax polish for the bike.
-This set offers an age-appropriate build and play experience for ages 7-12.
-Connect with 41232 Super Hero High School or join other Dorm Room sets to expand your Super Hero play even more!
-Cute but evil Kryptomites are included in every LEGO® DC Super Hero Girls™ set.
-Bed, wardrobe and workstation together measure over 3” (9cm) high, 6” (17cm) wide and 1”(3cm) deep.
-Motorbike workstation measures over 1” (4cm) high, 1” (3cm) wide and 1” (3cm) deep.
-Invisible motorbike measures over 1” (3cm) high, 2” (6cm) long and under 1” (2cm) wide.
-Price: $19.99

NEW YORK COMIC-CON (October 5, 2016) – LEGO Systems, Inc., in partnership with Warner Bros. Consumer Products and DC Entertainment, today unveiled its first six building sets inspired by the popular DC Super Hero Girls franchise. Featuring a powerful and diverse roster of renowned female DC Super Heroes and Super-Villains, LEGO® DC Super Hero Girls building sets engage children’s creativity and imagination to recreate the property’s action-packed, high school based storyline. To leverage the momentum of the franchise this holiday gifting season, the company is advancing availability of three of the six new building sets to hit shelves on November 27, 2016, only in the United States, Canada and Mexico, with the remaining three becoming available during the originally scheduled global launch in January 2017. Additional mission-based building sets will launch globally in August 2017. New York Comic Con attendees are the first to preview the new collection at the LEGO booth #1336 in Hall 3B at Jacob K. Javits Convention Center from October 6-9.

“We are really thrilled to bring to life the combination of teamwork, fun and action-packed missions found in this DC Super Hero universe on our LEGO minidoll platform,” said Jill Wilfert, vice president licensing and entertainment for the LEGO Group. “The DC Super Hero Girls story translates so well into construction play, inspiring great vehicles and structures with surprising features that, together with the DC Super Hero Girls characters, provide hours of creative building and role play fun.”

“Together with our long-standing partners at the LEGO Group, we’re excited to bring DC Super Hero Girls to life in LEGO form,” said Kelly Gilmore, Senior Vice President of Global Toys for Warner Bros. Consumer Products. ”Capturing these strong, brave and powerful characters and empowering storylines, children around the world can now work on their super building powers as they play and rebuild together with their favorite DC Super Hero characters.”

New York Comic Con Activities
In addition to the building sets, fans will be delighted by LEGO Master Builder creations, including life-sized LEGO models of DC Super Hero Girls™ Supergirl™ and Harley Quinn™ standing over 5-feet tall each, plus a massive tryptic LEGO mosaic built from LEGO Bricks featuring DC Super Heroes Bumblee™, Wonder Woman™ and Batgirl™ characters. A LEGO version of DC Super Hero Girls Batgirl™ will be given away to lucky winners in a daily drawing beginning on Thursday, October 6, starting at 12:30pm ET, while supplies last.

To secure an opportunity to receive the special LEGO DC Super Hero Girls giveaway, show attendees with a 4-Day Fan badge, 3-Day Fan Badge or Single Fan badge should head to the back of Hall 1E for a 12:30pm drawing. There will be one drawing per person, per day. Prizes will be awarded onsite.

Fans who are not attending New York Comic Con have a chance to win the exclusive LEGO DC Super Hero Girls Batgirl™ giveaway via Twitter by following @LEGO_Group and the hashtag #LEGONYCC.