The LEGO Ideas team has just announced the candidates for the first 2016 review period. To qualify any LEGO Ideas submission needed the support of 10,000 Ideas users during their time on the site. They needed to reach that 10,000 point between January 1 and the end of Sunday, May 1, 2016.

In alphabetical order, here are the 9 qualifiers.

This set by whatpumpkin (Jessica Russell) attempts to capture the magnificent experience of seeing towering dinosaur skeletons at a museum in a small display featuring four popular dinosaurs (and one popular pterosaur) in skeletons as accurate as she could achieve at this scale. The genuses are:

Additionally, a paleontologist and a family of three are in the exhibit, to stand in awe at the creatures before them.

We all know that Star Wars is one of LEGO’s best license properties by the way the sets fly off the shelf, they have a day for it and they keep producing a ton of new sets. This proposal brings use the Jedi High Council Chamber from the prequel movies, where the Jedi Masters meet during the rule of the Galactic Empire. Designer lojaco (Jacopo Magri) has done a very nice job of capturing the Jedi Council Chamber in this compact set and it offers some nice play opportunities.

If you were alive in the 80s you probably remember the film Short Circuit with Steve Guttenberg and Ally Sheedy. The hero of the film is the robot Number 5, a.k.a. Johnny Five, who is struck by lightning and gains a sense of awareness and free will. Designer PepaQuin (Matt De Lanoy) has included a photo of Johnny Five next to the previous LEGO Ideas winner Wall-E for a size comparison.

I remember seeing the first trailer for the original Jurassic Park and being blown away, and then reading the book and being even more impressed. The first movie was amazing and the series suffered a bit after that, but the recent Jurassic World brought back some of the awe I felt in the beginning.

Like Star Wars, Jurassic Park is a license the LEGO Group has worked with in the past to mixed success. This model by LDiEgo is a large playable set based on the main visitor  center from the movie featuring every room seen in the original movie’s action sequences. At 2623 pieces, the set will either be the largest Ideas set released, or reconfigured considerably by the LEGO Group prior to launch.

On first glance, I mistakenly thought this set was a little too boring and science based to be worth consideration. I was wrong. The primary construct is the circular track that uses a system of spinning wheels to accelerate a LEGO ball around the ring. It’s meant to illustrate the concept of the real world accelerator. The set could be a simple ring and accelerator or include a control room and other details to add more interest to the set. This is the second Ideas project to make the review stage for JKBrickWorks (Jason Allemann) after his LEGO Maze project, which was released about a month ago.

Without sounding too biased, this could be my favorite set of the 9. I love the modular buildings and for a classic early twentieth century train station this set from LegoWolf seems nearly perfect. This is another massive set with about 3000 pieces and sits on a 32×32 stud base and measures 12″ high. It’s definitely a European, not North American, station style but really fits in with the feel of the other modulars.

Robenanne’s Old Fishing Store is a set I’d buy. It’s another designed to fit with the modulars and also the Christmas Village theme. I love the relative simplicity of the look at the attention to detail. Unfortunately there’s only 1 image available of the set and it’s a high quality rendering rather than an actual build. At 2160 pieces this isn’t a small set but is within the “normal” scope for larger LEGO sets. 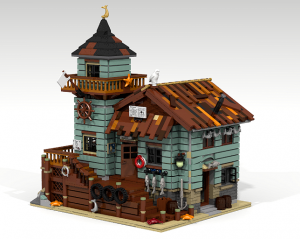 Bias time again. This is likely my least favorite set in this group of 9. I loved BB-8 in Star Wars: The Force Awakens, but I don’t see the appeal of this set. Having a LEGO BB-8 that actually rolls is pretty cool and very well done, don’t get me wrong, but it’s a bit of a 1 trick pony. Designers mjsmiley and artbot138 are obviously quite talented designers and engineers with a lot of community support, so I hope this set does well for them.

Congratulations to all 9 projects for reaching 10,000+ supporters, it’s an amazing accomplishment by itself, but unless LEGO decides to hold one over, there will be just one winner selected from the group. We’ll find out later in the year.