Summer is fast approaching and so are all the awesome new LEGO sets we’re being teased with. We just got official photos of some of the summer sets and want to share them with you. 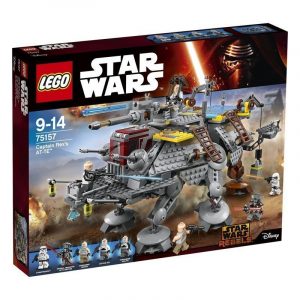 First up is LEGO Star Wars 75157 Captain Rex’s AT-TE. The All Terrain Tactical Enforcer is a six-legged walker that appears in Attack of the Clones, Revenge of the Sith, multimedia campaigns for The Clone Wars and early episodes of Star Wars Rebels. From Wikipedia: “AT-TEs are depicted as assault vehicles that appear at the Battle of Geonosis, as depicted in Attack of the Clones and various Clone Wars media … The six legs and overall flexibility reduce its speed, but increase its mobility and stability; moreover, its low speed allows it to walk through energy shields. The vehicles are fixed with laser turrets, a powerful mass driver cannon, and heavy electromagnetic armor.” 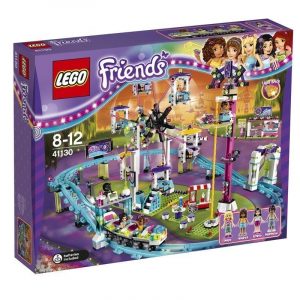 Next is LEGO Friends Amusement Park Roller Coaster 41130. LEGO Friends isn’t something I cover a lot here, but this one has a few interesting bits. In its 1100+ pieces we get a small child-like roller coaster, a ferris wheel and a free fall drop ride along with a few free-standing stands and minifigures. The blue roller coaster track is interesting, but not motorized like a lot of people were hoping. The set does include some lighted brick elements but I couldn’t immediately identify where these go. It also includes 4 mini-dolls that have been included in other sets previously.

Turning our attention to Super Heroes now, we get a better look at some of the new sets in both the Marvel and DC universes. 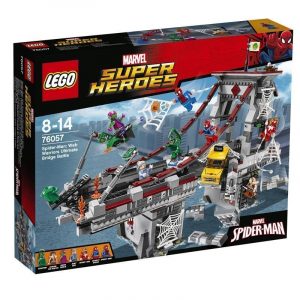 Firstly, 76057 – Spider-Man: Web Warriors Ultimate Bridge Battle which is a set people have been expressing mixed feelings about since it was first announced. The main feature of the set is the bridge itself which seems nicely detailed and designed. Included are 7 minifigures in total: Scorpion, Kraven the Hunter and Green Goblin represent the bad guys, and Aunt May, Spider-Girl, Scarlet Spider and Spider-Man are our heroes of the set. The box art depicts an epic battle on the bridge with webs everywhere, even with Spider-Man swing from the main tower. I can see people using this bridge as a template/starter for a much larger construction. 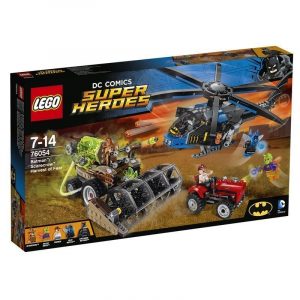 Next, 76054 – Batman: Scarecrow’s Harvest of Fear. The set includes 5 minifigs consisting of Scarecrow, Killer Moth, a Farmer, Blue Beetle and Gas Mask Batman. Killer Moth and Blue Beetle are exclusive to this set for now, although given the popularity of Blue Beetle we may see more of him. Scarecrow is driving an enormous farming combine to spread his fear toxin from the large tank in the back. The scared-looking farmer is driving a clean, simple red tractor while he tries to escape. Batman gets another incarnation of the Batcopter in blue and blue. This set has an SRP of $59.99 USD and should be released in August.