Did you know that Canada is turning 150 years old this year? To celebrate, they asked LEGO User Groups to contribute and selected a couple of members from each. Those users will get special kits from LEGO and have their builds featured later this year.

For now, several LEGO fans and clubs have come together to feature other builds that symbolize Canada. The work featured is top quality and represents Canada in both common and uncommon ways.

One of the iconic images included in the site is Toronto’s The Royal York Hotel which represents the many railway hotels built in major Canadian cities during the early 20th century to provide lodging for rail travelers. Built in Microscale by Jeff Van Winden of WHaCKoLuG, this beautiful structure required 1 non-LEGO piece, the signature sign atop the hotel, which was 3D printed. 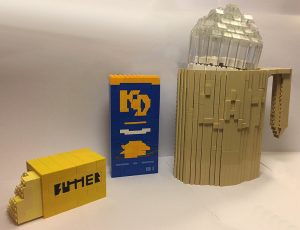 A lesser known symbol of Canada is the ongoing consumption of milk products delivered in plastic bags. Yep, plastic bags. I’d all but forgotten this until a recent trip back to Ontario. Here in the west (Vancouver), we use cartons and plastic jugs, but in the east they love their bags. Apparently it’s related to our conversion to the metric system and has been going on since the 1960s! I remember having to clean up a lot of spilled milk when a bag tore or got punctured. This build by Matthew Sklar celebrates that and includes a traditional box of Kraft Dinner (also kind of Canadian, by the way).

Be sure to check out the growing list of models at https://canadabuilds150.ca/